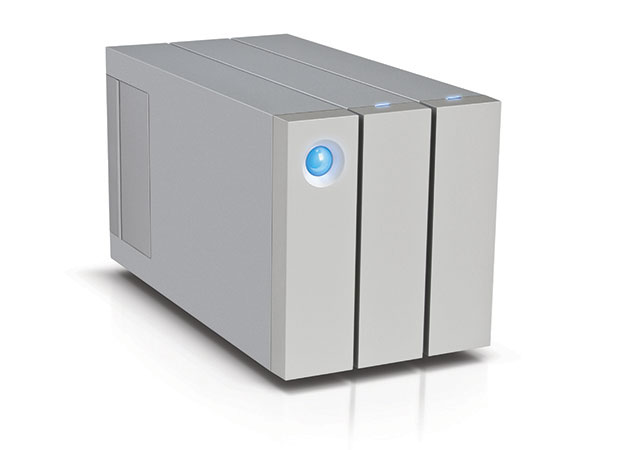 This product is no longer available, contact us for a replacement!

With the redesigned 2big, instead of aiming for incremental, LaCie shot for revolutionary. Its all-new industrial design demolishes the status quo and sets a new standard for versatility and reliability. The LaCie 2big also features unbeatable Thunderbolt 2 technology and hardware RAID for sensational performance.

Thunderbolt 2 Speeds for the 4K Era

With Thunderbolt 2 technology, the interface is no longer the performance bottleneck. For the 2big, LaCie harnessed the breakthrough performance potential of the Thunderbolt 2 I/O, squeezing the absolute best speeds out of the hard disks. Add a hardware RAID controller and 7200RPM disks and the result is incredible, sustained speeds of up to 420MB/s that turbocharge file transfers and backups.

With this kind of speed, videographers can edit multiple 2K uncompressed 10-bit streams or play back compressed 4K video. Digital photographers can browse a massive RAW photo library with zero lag. And, thanks to support for DisplayPort 1.2, it’s now possible to daisy chain higher-resolution displays such as 4K monitors.

With USB 3.0 and Thunderbolt 2 interfaces, the LaCie 2big gets the best possible speeds on any late-model PC or Mac. And, USB 3.0 backward compatibility means that you can connect the LaCie 2big to any standard computer. With support for exFAT and built-in hardware RAID, you can seamlessly connect to both PC and Mac computers without losing your RAID configuration. Whatever your workstation, move mountains of data – fast.

Thunderbolt 2 continues to support daisy chaining of up to six devices to a computer via a single cable (included in the box). This means that professionals can daisy chain up to five LaCie 2bigs plus a 4K display to a computer, bringing capacity, incredible speed, and convenience. Thunderbolt 2 is also backward compatible and uses the same cables and connectors as first-generation Thunderbolt1 devices and computers.

RAID for Speed or Security

In addition to compatibility with any computer, hardware RAID delivers sustained performance and better reliability. The LaCie 2big’s range of RAID modes also gives you the flexibility to tailor the product to meet your needs. It’s incredibly easy to change the RAID mode, but impossible to do so accidently. You can leave it in RAID 02 (FAST) mode to maximize speed and capacity for working on current projects, and then move completed projects to archival storage incredibly quickly.

Or configure the LaCie 2big in RAID 1 or Mirroring (SAFE) mode, which provides data protection if one disk fails. And thanks to hot-swappable disks, you can simply replace a disk – from the front – with zero data loss and no work interruption. Even in RAID 1, impressive transfer speeds slash the time it takes to perform backups, making it easier to back up more frequently. The LaCie 2big even features JBOD, so you can see and use each disk independently.

Packed with Value for Pros

With a bundled professional backup software suite and compatibility with Time Machine™ and Windows Backup, the LaCie 2big includes everything you need for secure backup. And with email alerts, busy professionals can monitor their storage before potential problems escalate. This product also includes LaCie Private-Public software, which lets you prevent unauthorized access by password-protecting volumes with AES 256-bit encryption.

1 To achieve full interface bandwidth, connect the product to either a USB 3.0 or Thunderbolt 2 port on a computer or device.
2 These transfer rates were achieved using AJA System Test when connected to a 13" Macbook Pro with a 2.8GHz Intel® Core™ i7 processor and 8GB RAM. Actual data rates may vary depending on operating environment and other factors, such as RAID mode, RAID configuration, and disk capacity.

1 Hot swapping will result in data loss in a RAID 0 array.
2 To achieve full interface bandwidth, connect the product to either a USB 3.0 or Thunderbolt 2 port on a computer or device.
3 These transfer rates were achieved using AJA System Test when connected to a 13" Macbook Pro with a 2.8GHz Intel® Core™ i7 processor and 8GB RAM. Actual data rates may vary depending on operating environment and other factors, such as RAID mode, RAID configuration, and disk capacity.
4 These measurements have been made under normal conditions, one meter/three feet from the front of the product. This value may vary with conditions and product configuration.
5 Windows XP 32-bit does not support volumes with capacities exceeding 2TB.

When referring to drive capacity, one gigabyte, or GB, equals one billion bytes and one terabyte, or TB, equals one thousand billion bytes. Your computer’s operating system may use a different standard of measurement and report a lower capacity. In addition, some of the listed capacity is used for formatting and other functions and will not be available for data storage.